Marko gets hair cut by the Hanoi highway

After my last post, Kheang and I decided to go to a near by park and rest for a bit, before our long trip to Sapa and Fan Si Pan. We sat in the park for only a short while before I got bored. Kheang was reading a book that he bought for 70,000 dong ($5), an illegal photocopy of "The Quiet American" and thinks he got ripped off. I think he was just being nice to the guy who kept complaining about having no money and living in a village far away, hoping to one day be a cook.

We decided we were going to head over to a nearby lake that provided us with great sunset photos the night before. Kheang said he would try a "short-cut". Note-to-self and others who may in the future travel with Kheang, bring a map just in case. We must have crossed Hanoi three times and at one point took a street that took us right out of town in some farm/swamp land. Hanoi is no small city, it was quite a walk! But no worries, we're back, safe and sound.

The walking tour wasn't a disaster. We did get to see Hanoi like no other tourist has (maybe not even the locals) and I did manage to get my hair cut for 14,000 dong (not even $1). I found myself a friendly hair stylist situated right next to a busy highway. Kheang took a photo and I thought it'd be worthwhile sharing this one.
Posted by Marko at 8/10/2006 06:58:00 p.m. 1 comment:
Email ThisBlogThis!Share to TwitterShare to FacebookShare to Pinterest 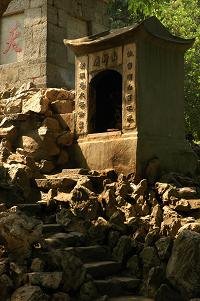 We’re in Hanoi and we’re leaving tonight to do Fan Si Pan; at 3,150 meters, it is the highest mountain Viet Nam. It’s a funny name, Mount Fancypants. It’s located in North Viet Nam and it’ll take us through Sapa, a very popular place that many say is a must to visit. Should be interesting. We’ll be there for three days, and then we’ll return to Hanoi to catch a flight to Cambodia. Finally, I have a chance to upload some photos. Unfortunately I don’t have the connector to my mp3 player (my photo storage device) so I can only upload the ones that I’ve taken this morning, in Hanoi.

Correction, it looks like I can only upload one for now. These one is taken at Hoan Kiem Lake. Legend has it that a sword was given to Le Loi, emperor of Viet Nam I can’t remember at what year, but guessing I think it was 1045, with which he successfully fouth off invaders, the Chinese I believe. He believed that god gave it to him and when he came across this lake, a golden tortuise surfaced and took the sword from him. He believed it was god taking his sword back and called the lake “Lake of Restored Sword” or “Hoan Kiem”. The red bridge leads to a temple called Ngoc Son Temple.

Anyway, that’s all for now. I think I’ve taken 1500 photos so far. I’m not sure that this information in this post is totally accurate, but no time to check now. Maybe later. :)
Posted by Marko at 8/10/2006 12:40:00 p.m. No comments:
Email ThisBlogThis!Share to TwitterShare to FacebookShare to Pinterest

Today we got back from Ha Long Bay, and it was amazing! We spent three days there, and not all went according to plan. The first was pretty crazy and we got to experience the monsoon for the first time. We were on the boat for most of the day and at the end of the day were dropped off at the Cat Ba island harbour where we waited for a bus to take us to a nearby hotel. We waited two hours because the road was flooded. Finally we got taken to the hotel by “the most powerful bus in Vietnam”. It really was. We drove through a part of the road that made the Bow River seem like creek. We were very wet, but it was an interesting experience.

Our second and third days at Ha Long Bay were amazing. The weather was perfect and for the first time we saw blue skies, a sunset and a sunrise. We got some great photos! But the photos will not do it justice. At night we sat at the top of the ship where we watched the sunset, followed by a full bright moon reflected in the ocean with the stars out. We spent a night on the boat. We also did some kayaking and swimming. It was a lot of fun. Kheang described Ha Long Bay as the most beautiful place on Earth.

We’ve been meeting a lot of tourists along the way. Tonight we spent with Max and Grady, an Australian couple. They invited us out to celebrate Max’s birthday. We didn’t stay too long as we’ll try and get up early tomorrow to explore and figure out where we’re going next. We might head back south to check out some of the places we might have overlooked.
Posted by Marko at 8/09/2006 10:24:00 p.m. No comments:
Email ThisBlogThis!Share to TwitterShare to FacebookShare to Pinterest

We're waiting for our bus to Ha Long bay. We had a little bit of a problem with our first hotel an had to move to another. I guess we bargained too well and they didn't want to give us the second night for the same price. Oh well. We went to a better one.

We parted ways with a couple of our English friends. It's too bad, it was quite fun hanging out and getting to know them. They said they might visit us in Canada. Who knows, maybe we'll go see them in England. :)

We didn't take too many pictures in Hanoi. We've been going out for drinks and food to much.

Oh bus is
Posted by Marko at 8/07/2006 07:47:00 a.m. No comments:
Email ThisBlogThis!Share to TwitterShare to FacebookShare to Pinterest
Newer Posts Older Posts Home